"Congress Mukt Bharat" - Is It The End of Congress 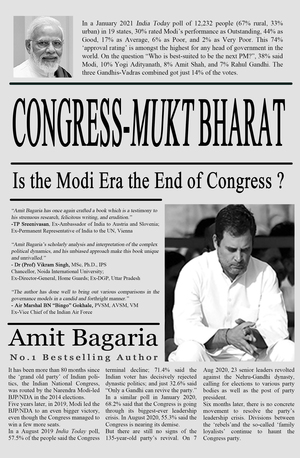 As Modi rides a bullet train in reshaping India, are we headed towards Congress-Mukt Bharat?

“Congress-Mukt Bharat” is often seen by many observers as a political jibe from leaders of the BJP, including Prime Minister Narendra Modi himself, against their political opponents, especially the Congress Party. However, what it means to make Bharat “Congress-Mukt” can have myriad interpretations as per several critics.

So, what is Bagaria’s Congress-Mukt Bharat? The book steadfastly fixes its gaze on the manner in which the Indian National Congress, particularly its leadership, has managed its own affairs in the last couple of decades, giving their historical background and the likely future.

Giving a kickstart by listing some statements by the erstwhile Congress president and the future hope of the Party, Rahul Gandhi, the book brings out elicited laughs, smiles, and smirks among the people at large. However, the trivial ends there.

The author shifts his focus on serious number crunching, through his well-researched data on how the political fortunes of the Congress Party has been dwindling ever since Sonia Gandhi came at the helm. During the 23 years that Sonia and her son Rahul (for a brief period of ~20 months) have been president, the Party has lost 31.6% vote share and 50.2% Lok Sabha seats. Sonia has also been the longest-serving president in the 135-year-old Party’s history.

Through his book, Bagaria portrays the real struggle to save what could very well be called the political Titanic of India, the Congress Party. With a fascinating style and extensive research, the book captures the downfall of the Congress, highlighting its worse crisis in history.

"2 June 2022 will mark the longest period of a non-Congress rule in India’s history!" the author tells us, right at the beginning. Not many youngsters would realise, or be ready to believe that, till a few decades ago, the popular saying about Congress was that “there is no alternative”.

The way that the book slowly unveils the yesterday, today, and the possible future of Indian politics is worth reading.

As per the fast developing story of contemporary India, will Narendra Modi be really able to politically smother the Grand Old Party? A constant question that preoccupies the mind of readers throughout the entire course of reading.

Through his gripping and balanced writing skills, the author uniquely takes readers through the complex dynamics of post-Independence Indian politics in a simple and lucid manner. The book presents the vast and domino impact of the policies, feats and follies of the Congress governments in shaping the socio-economic fabric of India.

The author raises hard striking questions on the various policies of the UPA govt. throughout his book. Besides, he has also dealt with in detail on issues like the scams during the Sonia-MMS Era, and the bogey of “Hindu Terror”. Or the lack of leadership, and greed dominating nationalism. The book questions the UPA government for weakening and not modernising the armed forces, thus compromising India’s national security.

It is not only confined to Congress-bashing. It also highlights the Top Successes and Biggest Failures of Modi 1.0; besides, of course, discussing the BIG Moves of Modi 2.0, and J&K becoming a “Part of India”.

Further, the author has provided some interesting assessments, giving points on a scale of 10, not only to all the 14 Prime Ministers of India, but also to the Ministers in the Modi 2.0 government. He caps it off with his own ideal ministry―backing all of this with solid background data and information.

For those interested to have a balanced look at the current political landscape of India, this book provides a much-needed backgrounder―all in one place.

Amit Bagaria, an alumni of St. Xavier’s College (Kolkata), John Carroll University (USA) and Harvard University (USA), is an entrepreneur-turned-author, who has authored 10 non-fiction books and two fiction novels since November 2017. An out-of-box thinker, thought leader, and marketing whiz, Amit has excelled at challenging fixated mind-sets and successfully make a mark for himself in different sectors. He has featured in 260+ media articles and 40+ TV interviews in 19 countries. While studying journalism in the US, he was the university newspaper’s News Editor and got an “All American Journalist Award” from the American Scholastic Press Association. He has written 40+ guest articles in various newspapers and magazines including The Economic Times, The Indian Express, and DNA, as well as six cover stories for retail-sector magazines. Amit has been guest faculty at IIM-Bangalore; Tata Institute of Social Studies, Mumbai; and Symbiosis, Pune; a part of CII and FICCI national committees; an anchor or moderator at 15+ events in India, UK, Dubai, and Spain; a guest speaker at several more; and a member of award juries in India and France.

The popular understanding of politics says that no person or entity should ever be written-off completely. For all the political enthusiasts out there, Congress-Mukt Bharat perfectly serves to take a hard-nosed look at both―the Party whose future is certainly in question; and the Party (BJP) which is expected to come up with positive answers for many questions of a populace that has often found itself at the receiving end of mismanagement and corruption by the Congress for many decades.

The reviewers have praised this book without reservations.

“Amit has once again crafted a book, which is a testimony to his strenuous research, felicitous writing, and erudition, and has carried out this task with admirable skill and efficiency,” says former Indian Ambassador TP Sreenivasan.

“The author has done well to bring out various comparisons in the governance models in a candid and forthright manner,” says Air Marshal BN “Bingo” Gokhale, Former Vice Chief of the Indian Air Force.

“Extensive research and study have made this book a masterpiece, and indispensable for those interested in understanding the significant factors and undercurrents that have contributed to contemporary political, social, and economic developments in India. In his unique style, Amit has surgically and fairly compared earlier governments with that of Modi. Amit’s scholarly analysis and interpretation of the complex political dynamics, and his unbiased approach make this book unique and unrivalled,” says Dr (Prof) Vikram Singh, Chancellor, Noida International University; Former Director-General, Home Guards; Former DGP, Uttar Pradesh.

“Are we really headed towards “Congress Mukt Bharat”….Amit Bagaria’s….arguments are certainly compelling and the author quotes from several former and current Congress leaders, authors, journalists and others, which also seems to support his argument.,” says Aabhas Maldahiyar, best-selling author of #Modi Again, a bestseller from Garuda Prakashan.

“This book is not just another story of Mahabharat!”
The very first line of this book warns you of what you will not
find in the pages ahead.

From the author who brought to you a well-researched book
‘Ramayan Retold with Scientific Evidences’, Smt. Saroj Bala
now brings to the table an even more interesting dating of the
events of Mahabharat,

The Ashtavakra Gita illuminates an ancient conversation between the sage Ashtavakra and Janaka, a king with both worldly responsibilities and deep spiritual questioning about the nature of reality. “What is real?” Janaka asks. So begins one of the most unique conversations to ever take place on this planet, as Ashtavakra takes Janaka by the hand and leads him step by step into deeper levels of understanding until enlightenment dawns.

The book Urban Naxals by film-maker Vivek Agnihotri is an eye-opener! The book is published by Garuda Prakashan and available at Garuda Books. It tells of his journey in making of the film “Buddha in a Traffic Jam” which exposed the nexus between an India-wide Maoist terror movement and their supporters in urban centers such as academia and media.